Les Huguenots in the Hungarian National Opera, the 25th of January, 2019

I am starting to be a bit addicted to the operas of Giacomo Meyerbeer and now I managed to fit into my schedule to visit to Budapest to hear ”Les Huguenots”. The opera was finished in 1836 and the librettist was Eugène Scribe (some additions made by Émile Deschamps).

The background story of the opera is the St Bartholomew’s Day Massacre in 1572, where the Catholics cruelly killed thousands of protestant Huguenots in Paris. What happened hundreds of years ago is still immensely contemporary. One just needs to think about all the acts of terror today between e.g. the Sunnis and Shi’as in several countries.

Along with the historic background there is a fictional love story. A catholic woman, Valentine, is in the beginning of the opera engaged to another Catholic, Count of Nevers. Queen Marguerite, who wants to bring the two Christian fractions closer to each other, demands her to break off the engagement and marry a Protestant, Raoul de Nangis. Valentine is in love with Raoul, so she agrees to the plan. Raoul has also seen Valentine earlier and fallen in love with her, despite not knowing who the woman is. However, after having seen her together with Nevers, he believes they are lovers and in rage refuses to marry her. Only when Valentine reveals to him that the Catholics plan to murder him, does he believe she loves him, but it is too late already. Valentine has already wed Nevers. Raoul and Valentine find out, a little bit too late to stop the plot, that Catholics plan to massacre all Protestants. Since Nevers has meanwhile died in an attempt to save some Protestants, Raoul’s faithful servant Marcel marries them as soon as Valentine has converted to Protestant. The bloodthirsty mob rushes to them and kills them.

I really liked the set design of the opera by Balász Horesnyi. The walls and words falling and rising to and from the ceiling were an excellent mixture of modern times and old-fashioned pictures. The set actually almost prevented one from noticing that during the whole opera there was only one piece of furniture on the stage – the chair of the queen. The effect of the set was underlined by lights, whose designer was not mentioned in the programme leaflet.

Costume design by Yvette Alida Kovács was made to give an image of the 16th century so, that the Catholics wore white and the Protestants black. It looked good and it actually underlined the different behaviour of the fractions (Catholics full of joie de vivre and Protestants with a stricter view of life).

Director János Szikora had created an impressive opera, but especially fascinating in my opinion was the final scene of the opera, when huge alphabets that formed the word ”MERCY” fell down and broke to pieces. It kind of emphasized the lack of mercy in the endless wars of humankind.

Meyerbeer’s music in this opera is divine. In between of the amazing crowd scenes there were more silent moments, where the singing is accompanied with no instrument or only a single instrument. Insanely impressive. Even though the opera lasted four hours, there was no danger of getting bored. To me the main musical theme of the opera was the Lutheran choral ”Ein feste Burg”, that was sung throughout the opera with different lyrics. It was e.g. sung in the end of the opera, when a group of women and children, who had taken refuge in a church, were cruelly slaughtered.
”Les Huguenots” were seldom shown after the first years, but it has experienced a sort of renaissance in the last few years. It has been said that the reason behind this rejection was the difficulty of the music and you cannot deny that the music is challenging to sing. Most soloist should have both a very wide range and incredible agility of voice.  But in Budapest they had managed to gather a super group of soloist, out of whom I will here mention only a few. Klára Kolonits as queen Marguerite de Valois truly was the queen of the group. The endless decorations of the highest of tunes reached without any difficulty whatsoever. No wonder she received the strongest applause in the end of the night. Unbelievably beautiful! Sándor Csaba, who sang the role of Count of Nevers, also had a beautiful warm baritone voice, which was a pleasure to listen to. He also had the best French pronunciation of the bunch, though I have to say that everybody did rather well in pronouncing French. To my delight one of the soloists was a Finn – Petri Lindroos. He sang the role of Marcel and he also did very well. When he was singing the battle songs of the Protestants, you really could imagine being in the 16th century France.

The orchestra of the Hungarian National Opera and director Oliver von Dohnányi had a very good night despite the demanding job. The music was really versatile and must have required deep concentration, but the result was more than satisfactory.

All in all I must say that “Les Huguenots” was a great experience and I am definitely going to see it again if I every bump into it somewhere. That’s how impressive the music was. 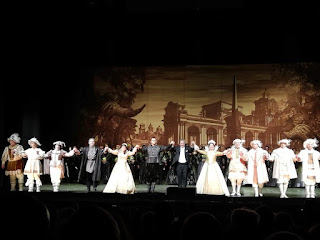